My fabulous postcard collection is growing week by week
and it is all down to YOU.
My wonderful friends around the world. ﻿


A BIG THANK to
ESME.
Esme's blog
is
CHOCOLATE & CROISSANTS
Fabulous blog and full of interesting posts,
Especially if you love Paris and France.
I do know that Esme has been to visit Portugal and Croatia
and loves travel. She is also a lover of books.


(Info taken from the web)
Zagreb is a city with a rich history
dating from the Roman times to the present day. The oldest settlement in the urban area of the city is Andautonia, a Roman settlement in the place of today's Ščitarjevo. The name "Zagreb" is mentioned for the first time in 1094 at the founding of the Zagreb diocese of Kaptol, and Zagreb became a free royal town in 1242, whereas the origin of the name still remains a mystery in spite of several theories.
The city is divided into three parts: the thousand-year old Gornji grad (Upper Town) which contains the Presidential Palace, the iconic St Mark’s Church, the Croatian parliament (Sabor), and museums and galleries which are all set in cobbled streets lit by gas lamps; the 19th century Donji grad (Lower Town) with its shops, restaurants, cafes, theatres and parks; and the modern post-World War II area of Novi Zagreb (‘new Zagreb’) which is full of high-rise buildings and basically has little to offer visitors.

Zagreb is also called a city of museums as there are more of them per square foot than any other city in the world. But this doesn’t mean that there is nothing else for you to do if you aren’t a history buff.


One of the many pleasures that the Zagrebcani (the locals)
enjoy is sitting in one of the numerous cafes watching the world go by.


We all love to sit and people watch ♥ 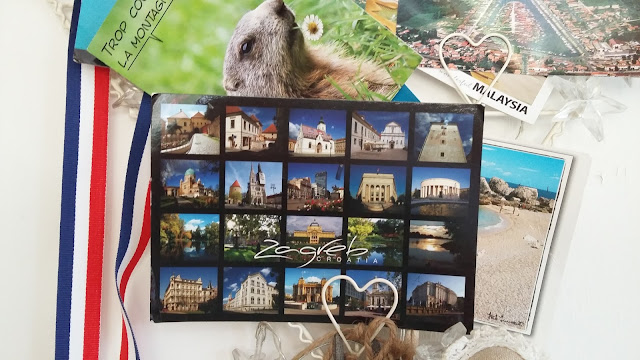 I think I will have to
SPREAD MY WINGS
and see other fabulous places you
all visit.