Tulips from Amsterdam or is it a Postcard?

My great friend Diane and her husband Nigel
went off on their travels again .

Taking in Amsterdam amongst other places.
They went to quite a few different towns , go and have a read!!!
They saw interesting places. 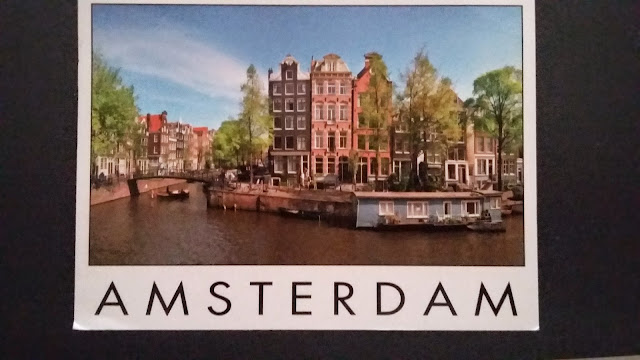 Here we have  the intersection of the
Brouwersgracht and Herengracht canals in Amsterdam.
Brouwersgracht is part of the canal belt connecting the Singel, Herengracht, Keizergracht and Prinsengracht and marks the northern border of the canal belt.
The canal served as a site for ships returning from Asia with spices and silks, and  Brouwersgracht had many warehouses and storage depots for the ships inventories. Breweries were also prevalent in the area due to the access to fresh water shipments. Today the warehouses are now apartments, some of the most expensive in Amsterdam.,

Herengracht  is the first of the three major canals in the city centre of Amsterdam, and is named after the heren regeerders who governed the city in the 16th and 17th century. The most fashionable part is called the Golden Bend, with many double wide mansions, inner gardens and coach houses on Keizersgracht. Samuel Sarphati (1813-1868) lived at the house at number 598 and Peter the Great stayed at the house at number 527 during his second visit to Amsterdam.
Thank you Diane , looks like you and  Nigel had a great trip.
♥ ♥ ♥