Anyone been to Sodermalm Heights - Stockholm ... ?

My lovely friend Krissa
who lives in Singapore has just been
on business and I received a card too!
She thought of me when she
was doing a little bit of sightseeing. Thank you ♥
Krissa's blog is
Connections to the World


Sodermalm is an island that forms the southern district of central Stockholm and
until the early 17th century  was mainly a rural, agricultural area.
The first urban areas were planned and built in the mid 17th century.
Sodermalm is also often referred to as "Soders hojder", the Heights of 'Soder', which reflects its domain  of sheer cliffs and rocky hills. 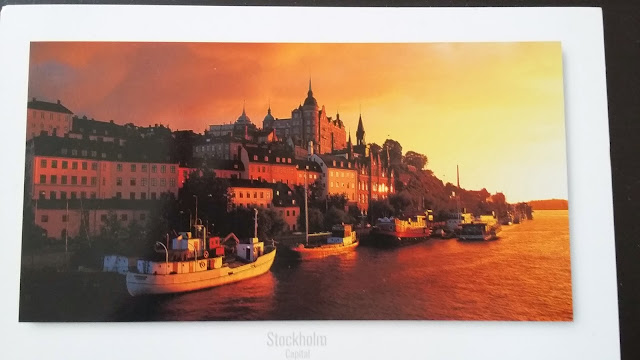 In the 18th century, the working class cottages that clung to Mariaberget, the steep cliffs facing Riddarfjarden, were replaced by the large buildings
that are there to the present day.
Today parts of Södermalm have rural feeling to them. . This area was mainly known as working class and  renowned for its poverty and regarded as a slum.
While there has been a romantic air about Sodermalm for
many decades, its slow ascendancy towards a
better reputation began as late as in the 1970s or 80s.
Today it is considered a fashionable place to live or to go to, and it boasts prominent shopping districts and a wide range of cafés, restaurants and bars.

♥ ♥ ♥ ♥ ♥
And for all you readers out there ...
"One of the literary phenomenons of recent years is the Millennium Trilogy by Steig Larsson, better known by their individual titles: The Girl With the Dragon Tattoo, The Girl Who Played with Fire and The Girl Who Kicked the Hornet’s Nest.

Stockholm provided the backdrop for these compelling thrillers, so it’s no surprise that fans are flocking to experience the city for themselves, and in particular, visit the places featured in the books.  And now thanks to an exciting new walking tour, you can step into the shadowy world of investigative journalist Mikael Blomkvist, and anti-hero Lisbeth Salander. You get to see many of the locations, including Blomkvist’s apartment, the editorial offices of ‘Millennium Magazine,’ and the bars frequented by Salander. You’ll even pass the café where Steig Larsson would tap away at his laptop, authoring the novels that would go on to sell millions of copies around the world, and even become hit feature films."
The above information was taken from a website P &O Cruises... !!