Before I say about my postcards, I would
just like to say that my friend Maria and her family
are safe and well in the Philippines.
Maria said that her family felt the strength, the shock waves
I believe, of the horrendous and devastating typhoon.
I cannot imagine for one minute how they are feeling ,
and the thousands who have lost their lives. Rest in Peace.
Very sad.


Yes my collection is huge now ,
I love seeing them on my wall..
I change them over after a few months or so ,
when I get new ones they go into my heart
holder ..♥
A big Thank you to Diane, who's blog is
Southamsdarling.
Diane writes about lots of amazing things,  places
and her family. Diane lives in Devon , has family
in France too. A super blog , do call over and say HI ♥
Diane is in France at this moment and she sent
me a lovely card of one of my favourite places in Paris..
Diane's daughter is not feeling brilliant at the moment , in fact
she was taken in to hospital , but now home  and hopefully on
the mend and bless Diane , she took time to think about me too♥
The Sacre Coeur in Montmartre. I could walk around here for hours. 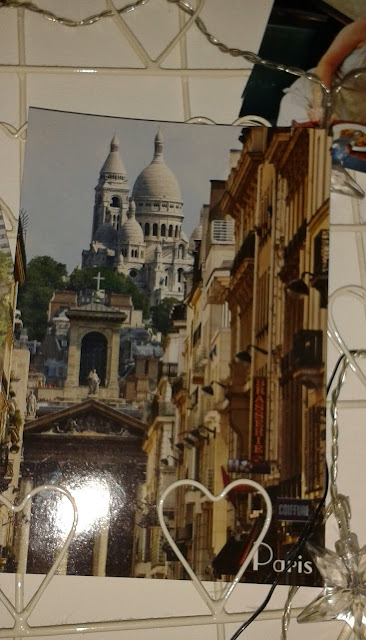 The first time I went to Paris , April 2009 with my friend
Caroline, we were in AWE , and climbed to the top of the dome.
Not many people knew you could do this . Actually nor did we,
until we found a doorway, which takes you either to the crypt or
to the steps to climb up . A nun pointed us in the right direction!
SUPERB !!
My other card came from Singapore and sent to me by a lady who
lives in the Philippines. She was there recently on holiday with her
French boyfriend :-) ..
Maria and I connected I believe through Instagram, and then her blog,
Connections to the world, which is super ,
all about the postcards she receives and the beautiful stamps too.
Unfortunately we do not have any pretty 88 pence stamps to put on our postcards
to send to her :-( 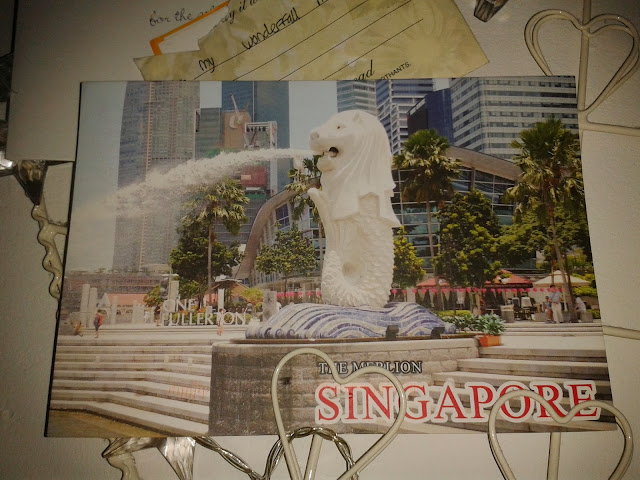 The Merlion is a mythical creature with the head of a lion and the body of a fish, used as a mascot  of Singapore. Its name combines "mer" meaning the sea and "lion". The fish body represents Singapore's origin as a fishing village when it was called Temasek, which means "sea town" in Javanese. The lion head represents Singapore's original name — Singapura — meaning "lion city" or "kota singa".
Singapore is another place very close to my heart ♥
I lived in there  for 3 years 1963 -1966 , when my dad was
in the Royal Air Force , unfortunately he passed away
in 1967 after we returned , so it was my last place with him
that I have memories off.

A big thank you to you both..