Cheapside - An Area in London with Lots of History..

Jennifer and I just stayed in this area for day ..
Walking with the map and then maybe taking a detour ,
here and there..!!
You definitely need to look up and down here.
Started out at Monument and walked the dotted line
with detours ..
Cheapside takes its name from ‘chepe’, a Saxon word for a market.
The street connected the southern end of the Roman Watling Street with the main City settlement to its east and its alignment was dictated by a convenient bridging point across the (now subterranean) River Walbrook. 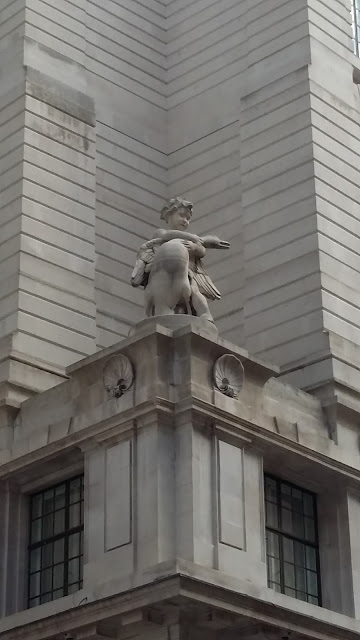 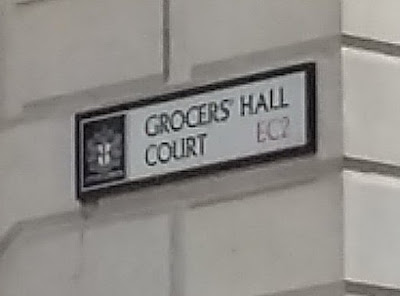 OLD JEWRY
Old Jewry is a one-way street in the City of London, the historic and financial centre of London. It is located within Coleman Street ward and links Poultry to Gresham Street.
William the Conqueror encouraged Jews to come to England soon after the Norman Conquest; some settled in cities throughout his new domain, including in London. According to Reverend Moses Margoliouth, Old Jewry was a ghetto. Ghettos, areas of a city mainly or exclusively populated by Jews, were common across Europe. In 2001, archaeologists discovered a mikveh (ritual bath) near to Old Jewry, on the corner of Gresham Street and Milk Street, under what is now the State Bank of India. It would have fallen into disuse after 1290, when the Jews were expelled from England. 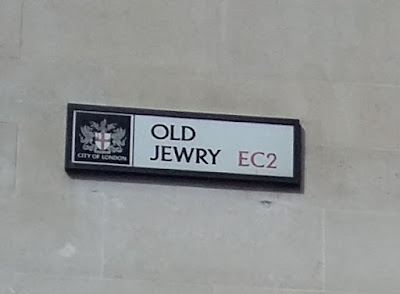 The earliest Ashkenazi synagogue constructed in London after the return of Jews to England in the 17th century was built about 1690 at Duke's Place, north of Aldgate. In 1696-7, the synagogue also acquired a burial ground, at Alderney Road. 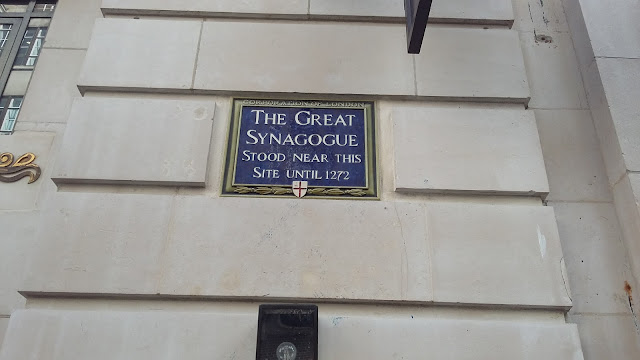 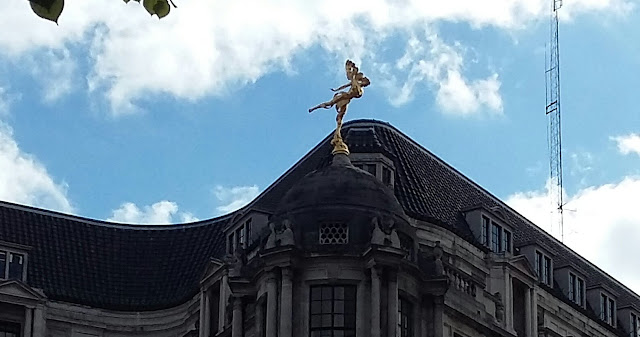 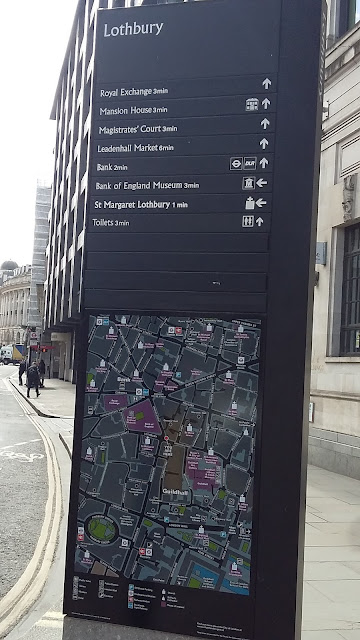 Love the OLD and NEW 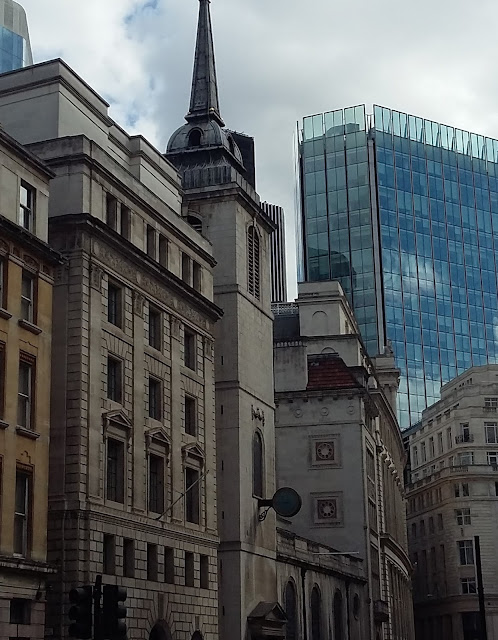 
Golden statue of Ariel
on
The Bank of England,
Prince's Street / Lothbury, EC2

The statue is by Charles Wheeler, who produced several works for the rebuilt Bank, of which Ariel is the most highly regarded and gained the Royal British Society of Sculptors’ medal for the best work of the year in 1937
This is taken from Tivoli Corner
In 1805 Sir John Soane, the architect responsible for the rebuilding of the Bank of England, completed his own, typically idiosyncratic, contribution to the craze: his Tivoli Corner, a spherical enclosure tagged on to the Bank at the junction of Lothbury and Prince's Street. It is a tomb-like, functionless space enclosed with weighty neoclassical columns and it can be entered from the north or west. Its roof is a portal, open to the sky, around which is carved a dedication to the citizens of London.

(It took me ages to find where I took the photo from, wasn't going to give up!!)
I love this photo. 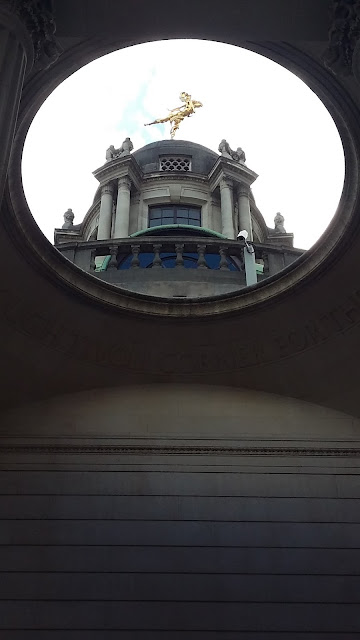 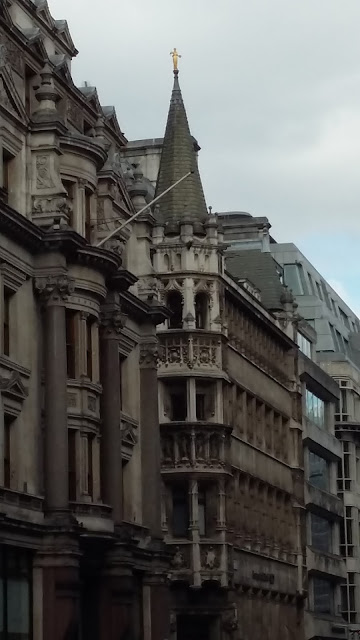 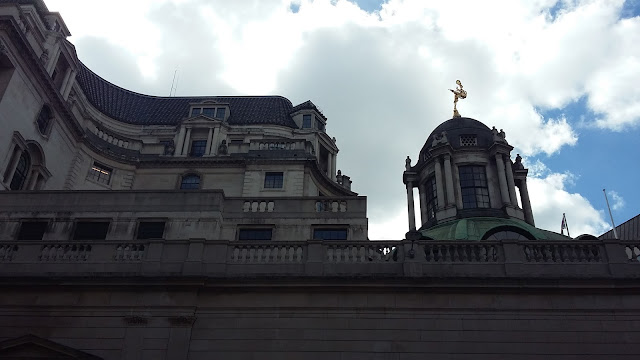 The map below shows Founders Court..
﻿


Founders Hall
Below is just a little piece of the history of the Hall..
more in the link above.

(taken from the internet)


The Founders' Company began its existence as one of the early medieval "guilds" or associations formed by members of various crafts or trades in the City of London. Their main purposes were to defend the craft against unfair competition, to assist its members in their work, to help those in distress and to promote and control education.

Founders were workers in brass and brass alloys or tinplate known as "Iatten" or "laton", producing small cast articles such as candlesticks and pots and pans. Their workshops were situated in and around Lothbury, a street that still exists under that name.

From 1508 to 1987 their parish church was St. Margaret Lothbury. Before that time, the Founders were associated with the church of St. Lawrence Jewry, and indeed there is evidence to suggest that the medieval guild grew out of a parish fraternity known as the Brotherhood of St. Clement, based on the church of St. Lawrence Jewry, which served the spiritual and material needs of its members. 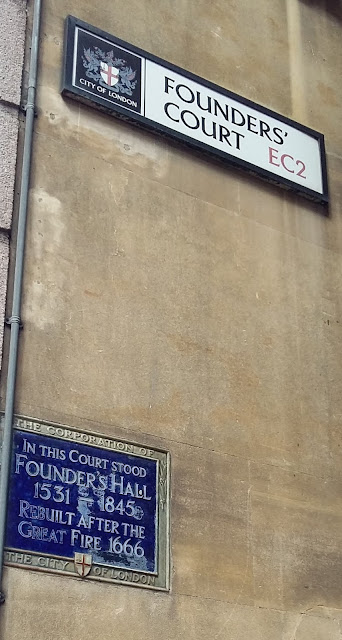 Ward of Cheap
Cheap is a small ward in the City of London.
It stretches west to east from King Edward Street, the border with Farringdon
Within ward, to Old Jewry, which adjoins Walbrook; and north to south from Gresham Street, the border with Aldersgate and Bassishaw wards, to Cheapside, the boundary with Cordwainer and Bread Street wards.
The name Cheap derives from the Old English word "chep" for "market" 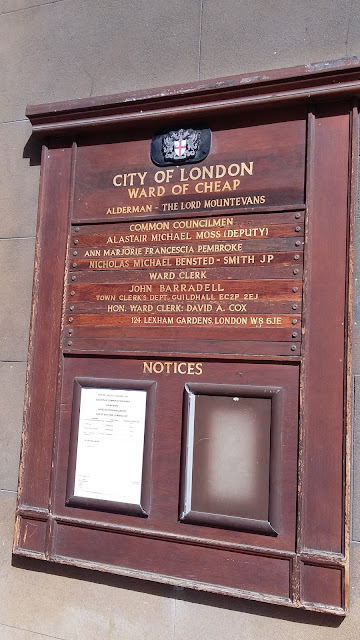 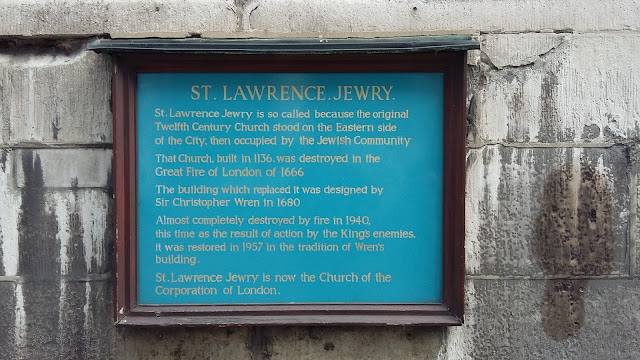 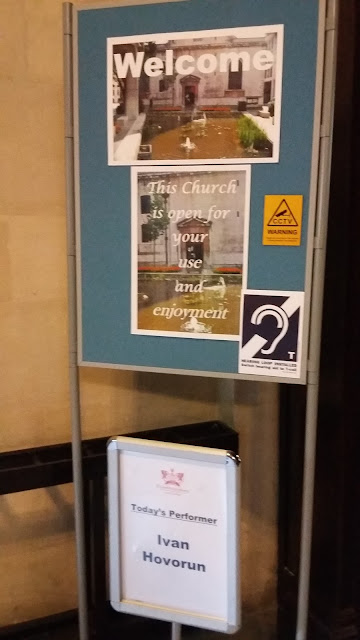 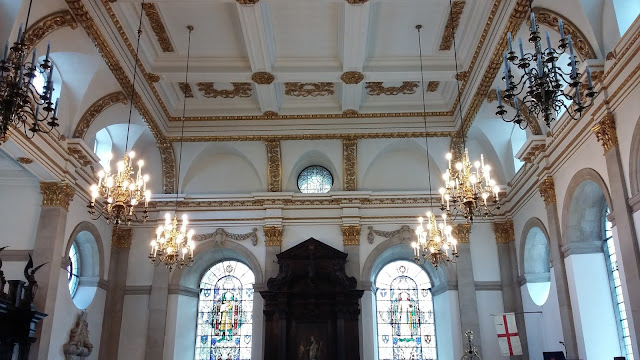 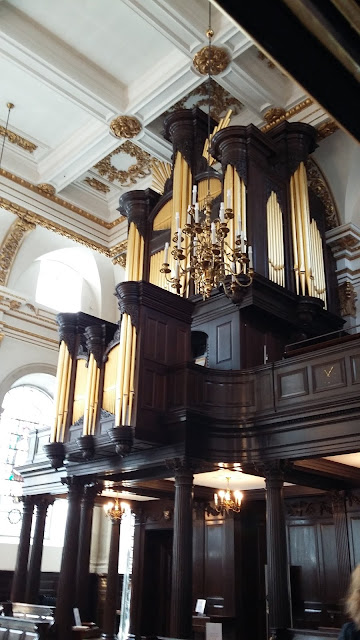 This is the St George Window in the Commonwealth Chapel 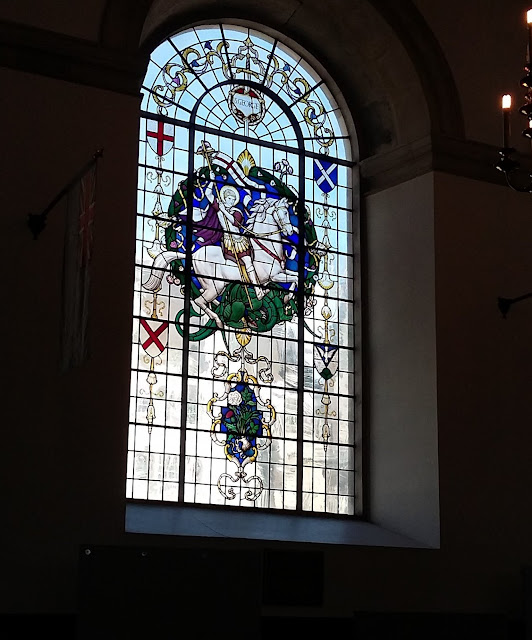 The church is regularly open weekdays and for special events such as an annual music festival in August offering daily lunchtime concerts. It is well worth visiting, especially since you can easily combine a visit to St Lawrence with a visit to the Guildhall,
its excellent art gallery, and the Roman amphitheatre discovered under Guildhall Yard during building of the Gallery﻿ 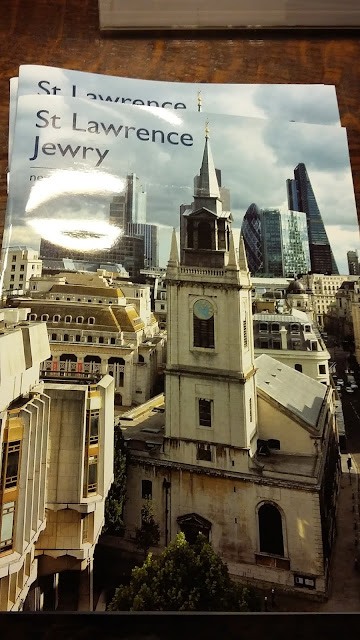 I do hope you have enjoyed this small tour.. I do have a little
bit more to write about. Jennifer and I did this little  tour in a DAY!!
All information is from the web - and links included.
♥♥♥♥♥♥♥♥
﻿