Anyone been to Mongolia?

A surprise postcard
popped through my
letter box last week.
The surprise card was from
my good friend's  HUSBAND Trevor
who has taken a trip by himself and
he remembered :-)
Marilyn is a lovely lady who I have known
for about 37 years , lost touch and a few
years ago we reconnected.
Reconnected through our sons who both joined the
Royal Air Force and they were based at the same camp
and bumped into each other. Small world.
Marilyn has given Trevor my address and he has been
sending a few cards .. Thank you Trevor.
Certainly go to places I have never thought of going.

Mongolia, a nation bordered by China and Russia, is known for its vast, rugged expanses and its nomadic people.
Its capital, Ulaanbaatar,
centres  around Chinggis Khaan (Genghis Khan) Square,
named after  the notorious founder of the 13th- and 14th-century Mongol Empire.

TREVOR said "Following in the footsteps of Genghis Khan :-)" 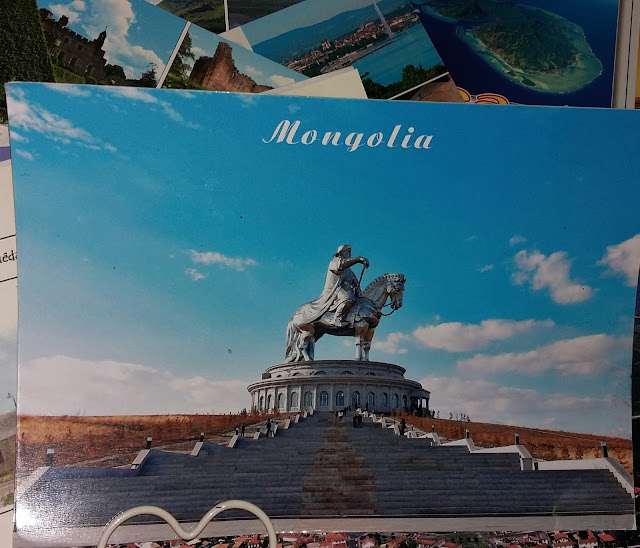 Thank you Trevor, certainly is an interesting postcard for my collection..
﻿
on July 26, 2015